Mepps made for Chub

Biggest Chub of season at estimated over 4lb on the Mepps again on Somerset Frome. Plenty of small Perch and smaller Chub all willing to take the lure. Thought I’d spooked a shoal of big Chub but cast ahead and drew the spinner through the group. Bang and a big scrap ensued. Beast of a chevin. 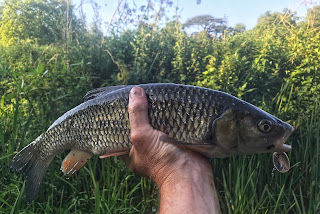 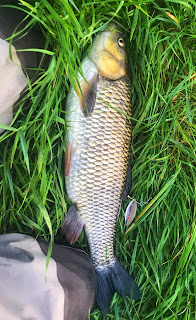 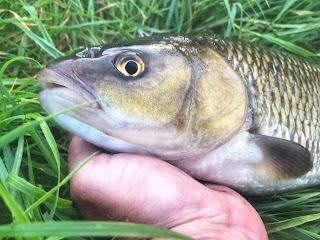 Posted by Suburban Flyman at 14:21 No comments:

Crazy Perch fest on the Mepps

Yet another red letter day for Perch on Somerset Frome. Absolute stunning Perch on large Salmon Mepps gracing the net. Later in the year this fish would be going well over 3lb. Lots of other smaller Perch, Pike and Chub making a cracking day on the river. 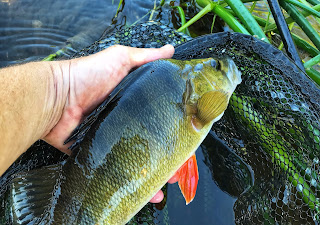 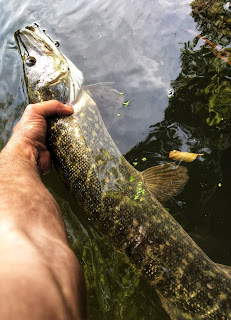 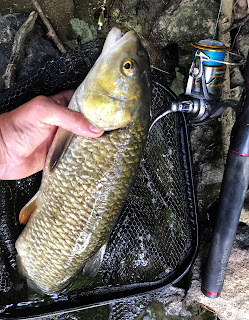 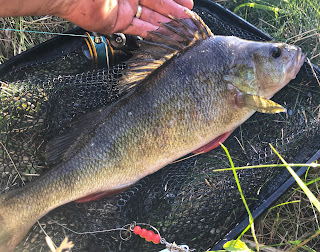 Posted by Suburban Flyman at 14:07 No comments:

My son James and I have been loving the Wrasse fishing over the summer in Cornwall. Soft plastic Black Minnows all the way held close to the rocks both of kayak and shore. James has almost a sixth sense for tempting them out. Bass at the time of writing not abundant. 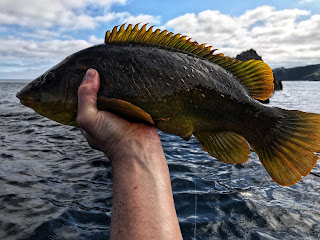 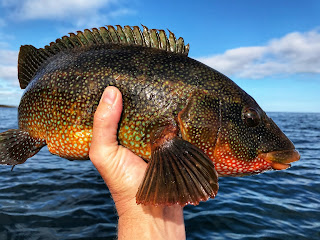 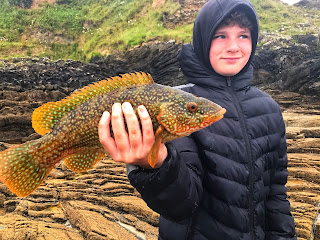 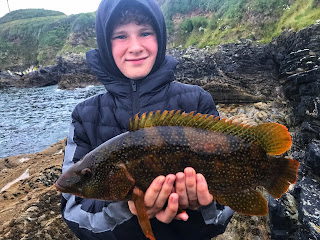 Posted by Suburban Flyman at 14:22 No comments:

What’s this not more spinning on the Mepps

The Mepps didn’t disappoint again today with Chub, Perch and Brown Trout taking the spinner. Again out on Somerset Frome downstream of the previous weekends exploits. Big surprise today wasn’t the Perch but an absolute beast of a Brownie. It launched around the river like a Salmon and in the net I could see was my biggest Brown Trout for some years. Conservatively over 17 inches and 2.5lb of muscle with full on kype jaw. 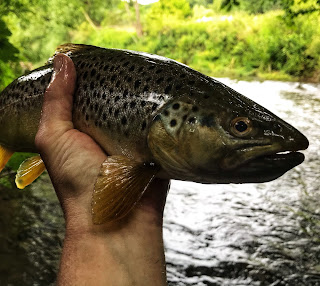 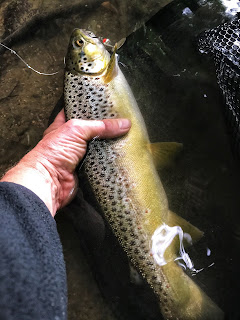 Plenty of action after the trout from Chub and Perch but just not in the same league. Another cracking days lure fishing. Kind of feel odd I didn’t catch the trout on fly but I would have never fly fished that section of river for trout so it would have never come to pass! 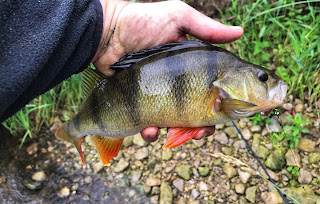 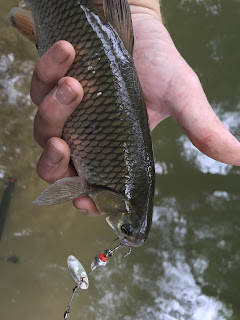 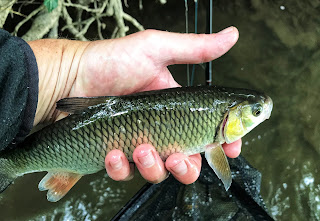 Something different getting to grips with the Mepps

Well whilst enjoying the trout fly fishing I was really looking to to tap into some coarse fishing now the season had opened if not on fly then lure fishing. I wanted to catch primarily Chub but both Perch and Pike would not disappoint me. My favourite spot on Somerset Frome was the location and met up with Red who I had also sounded out for a change to the usual fly gear. Within a couple of casts with the Mepps XD I’d had a knock but lost the Perch close to the net. After moving upstream I found a hollow around a submerged tree and dropped the spinner in after a powerful riffle. As I retrieved from the willow branches a large fished launched at the lure and gave one hell of scrap. In the net it was a lovely Chub getting on for 4lbs. 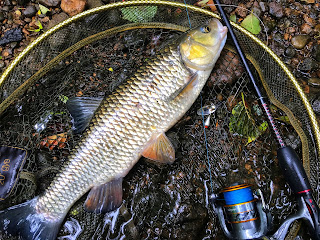 Red had caught a number of smaller Chub in a small fast run. As we worked upstream next fish was a fine Perch netted by Red followed by another by me, both fish nearing if not 2lb. The action was non stop with both Perch and Chub taking the Mepps with abandonment. 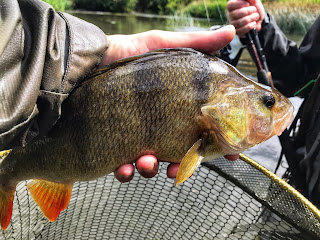 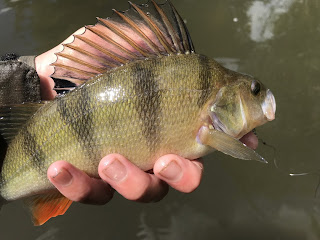 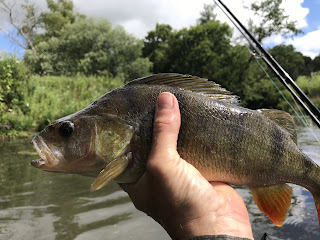 We then drove a mile or so downstream to try another section of the Somerset Frome where we knew both Chub and Perch were abundant. After a couple of nice 1/2 lb Perch I hooked an absolute monster that took me all over the pool I was fishing. In the net I could see it was over 3lb easily my PB. As I stared in awe at the fish it buried itself in the net and found a hole in the seam I was just not aware of so no photo unfortunately but I have the memory! As the day wore on my final fish was a nice jack Pike in a shallow run. Epic days lure fishing, the Mepps is king! 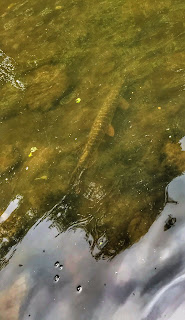 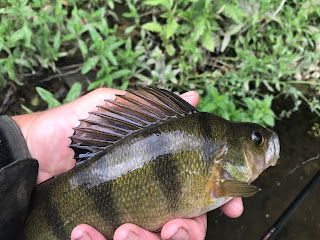 Posted by Suburban Flyman at 09:00 No comments:

First session on Bristol Frome did not disappoint with two fantastic fish on the dry. I actually had rises from what I thought were bigger fish perhaps lucky on a 3lb leader! 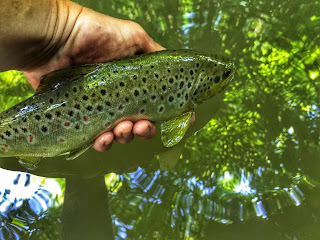 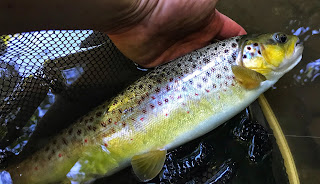 The Mayfly hatch on sections of the river has also been quite spectacular.

Posted by Suburban Flyman at 22:00 No comments:

Back to my roots and favourite section of the River Chew. I have to say the river is now is wild as ever and I was actually really impressed with the gravels and number of wild trout. Course species like Dace and also Grayling conspicuously absent. Water level low with no real difference from last season. Whether it was the Mayfly but the trout were abundant and evident with rising fish all over the place. Loved it catching a good number of fish in all sizes purely on the dry. 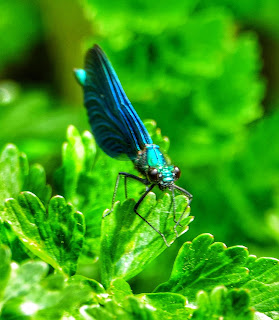 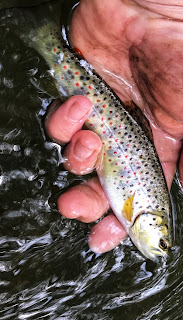 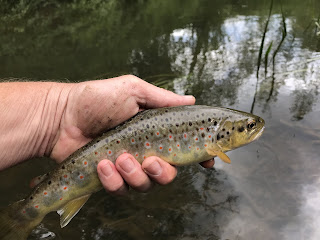 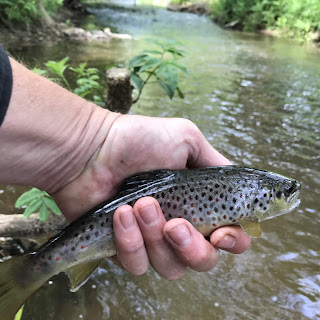 Suburban Flyman
I appreciate all types of fishing including both fresh and saltwater, game and coarse. I love kayaking and regularly fish from a kayak with friends and family. I am interested in all wildlife and this coincides nicely with my main activities of surfing, fishing and kayaking where many of my most privileged experiences have taken place. I live near Bristol, and fish a variety of local patches always trying to mix it up, fishing less popular locations just to seek out surprises. Some of my favoured locations are: the Bristol Frome, Wellow Brook and the River Chew. Further a field I fish Cornwall’s trout streams, Wiltshire’s Nadder and Hampshire Avon, together with the South and Cornish Coast. I surf and its usually at Woolacombe, Kimmeridge, Penhale or Fistral. If I am lucky enough to be on Tenerife during the Winter months I will surf or fish on the South West coast. somewhere.